Eckankar is one of my favorite fringe religious cults in America and it’s probably my third favorite thing to come out of Minnesota besides Prince and the accent. If you are looking for spiritual freedom, this is the cult for you.

First of all, they do badass shit like separate their souls from their bodies. Can you go beyond your mortal form? No. Can you experience god in only light and sound? Hell no.

The founder, Paul Twitchell, died in 1971 but was an avid writer, so followers for the religion have a well-documented guide to spiritual awakening. There is just one issue with his writings, most of it is plagiarized. Which seems to be par for the course for just about every religion on Earth. Twitchell’s followers have defended him against the claims, saying he was merely compiling other great works he admired. IDK sounds like he was just sampling.

Overall, I think the thing I respect most about thisEckankar religion is the current leader, Harold Klemp, has the BRAVERY and FORTITUDE to turn his religion into a corporation so it can sell its materials for profit. Don’t worry. He’s the CEO.

Some estimate this cul has up to 500,000 members in 100 countries worldwide. Pretty impressive for a fringe religion that’s founder died 50 years ago. You gotta hand it to the guy.. That’s like two Fort Wayne, Indianas, for reference. 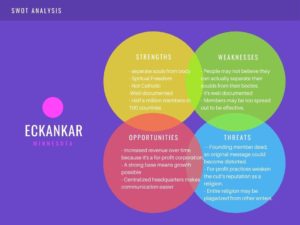 If you are interested in joining: Visit the company’s headquarters, the Temple of Eck in Chanhassen, Minnesota.